CONCEPT: The detail used in the design, which is characteristic of Kalamota, is the HOUSE.

The house on the construction site of the hotel and the position itself are a valuable part of the story and history of the island.

The old / new house is located along the coast of the island of Kalamot with a rocky driveway. The wave, symbolically shown on the sign and united with the abstract representation of the house in the form of an irregular square, symbolically shows the house – a hotel that “swings” on the waves along the shore.

The sign is positioned above the logo, where the logo becomes partially “immersed” in the sea and thus the entire area used, from business cards, envelopes and all materials in fact represents the rocks on the seashore. The selected paper also has a stone texture.

The logo is constructed from typographic segments and fragmented resembles a stone, or rock on the shore. Fragmented, but more compact and firmer, as is the rock on the shore, and the position below the house communicates that story.

G chelo is named after the place where the hotel is located. In addition to the visual identity, a number of menus and a wine list have been made for the restaurant. The same materials were retained from which the materials for the Kalamota Hotel were made, paper, twine, boards, which were also characteristic elements of hotel decoration. The sign G chelo retains the same principle of treating typography in terms of fragmentation.

Instead of photography, the materials use illustrations as representations of the offer, thus enhancing the individual approach to each guest and retaining a personal character. All elements of the hotel and restaurant have a raw, somewhat pirate character, although every detail in the performance is given special attention. 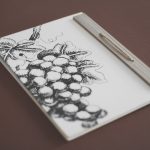 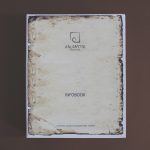