Inside this light body is liquid with Vibrio phosphoreum culture. The culture can live for years. Light occurs only when liquid is moving (reaction requires oxygen). Light is activated by turning the object in clockwise direction and deactivated by turning in the opposite direction. The nature of light is cold (490 nm – blue-green). The illuminator doesn’t use any supplement energy source for lighting.

Bioluminescence:
Bioluminescence is the emission of visible light emitted from living species. It is primarily a marine phenomenon, where perhaps 90% of animals that inhibit the upper 2km of ocean water are bioluminescent. On the land, bioluminescence can be found on some mushrooms and some kind of insects. The light is a result of chemical reaction which originates in an organism by reaction between luciferin and oxygen and luciferase that catalyzes the reaction. The light in the sea is concentrated in blue spectrum. Most of them emit light between 440-479nm. This blue-green light is best transmitted in the sea, and that is the reason why most marine organisms emit this spectrum.

Microorganism:
Inside this light body is Vibrio phosphoreum culture, the most investigated marine luminescent bacteria. They can live for years at room temperature. Luminescent bacteria don’t produce light when their cells are in considerable dispersion in the sea-water, but culture in the medium produce light very efficiently.

These microorganisms can be found in sea water and marine species, and they can’t proliferate in environment (because they need 30g NaCl per 1l of medium) or grow in soil- or in fresh-water organisms. One single-cell organism multiplying can give thousands of others, depending on space and conditions. After growth, the culture comes to its level of stability. Vibrio phosphoreum emit 103-104 photons/s, the light is blue-green with wavelength of 490nm. The light generation reaction requires oxygen, so to produce light, liquid should be aerated.

Liquid moving-light:
This bioluminescent illuminator doesn’t use supplement energy source for lighting. Its light originates by circulation of liquid. Each cube (two of four), contains 2dl of liquid with luminescent microorganisms. The light is activated by turning the object in clockwise direction and continues as long as the liquid is in the upper cube, in this case at least 1h. Light will go off when turning the object in opposite direction.

Light:
Bioluminescent illuminator couldn’t replace the standard lighting system; it is only a supplement source of light. The nature of this light is cold, it doesn’t give of any heat. Product of reaction is 100% light in distinction from light bulb which looses 90% of energy on heat, and only 10% on light. In distinction from the light sticks which, once when the reaction starts last max. 24h and can’t be stopped, this bioluminescent light can be stopped and activated again.

Design:
Bioluminescent illuminator with its appearance symbolizes many means of the same process of bioluminescence and the nature of the medium. The lighting is clear and simple by the day, and magic by the night, as bioluminescence is in the nature. Although the object itself doesn’t move, the inside has its own moving cycle, as it is in the nature, as well as in the sea where everything changes. This Illuminator moves shadows and gives a feeling of things moving through the interior.

Technical description:
Dimensions of the illuminator are 130x130x65mm. Four connected polypropylene (PP) cubes (65x65x65mm) made by the method of injection blowing, and sand-blasting surface, form empty inside star-form space. Inside this form is the profile of same form, made from polymethyl-metacrilate (PMMA) by extrusion, which stabilizes the outside form. On the outside there are star-form frames made from PMMA, which are connected to inside profile. One of them could be removed from construction, but the other is glued to the profile. Removable star can be replaced with frames of different forms and materials, so there is a chance for unlimited number of combinations.

Each cube is equal to another, and mutually connected with two profiles made from polyamide (PA), and with rubber rings inside each profile. One insures that liquid and air move free, but the other has a supplement which glides along the profile with displacement of 1,5mm, and in this way stops or allows the liquid to move. All inside elements allow liquid to flow in only one direction, and make it possible to turn on and off the light. 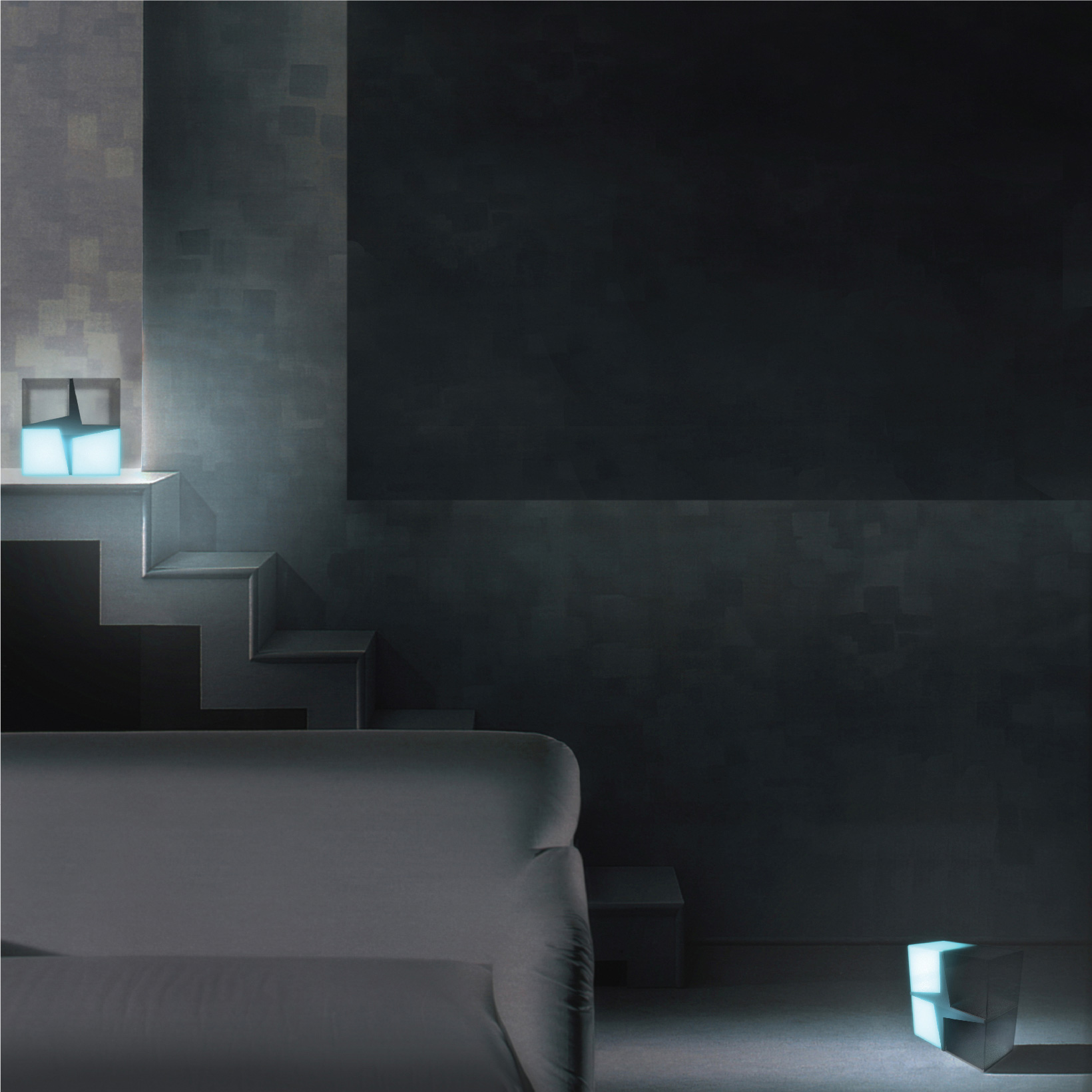